Planning for wellbeing at the Mudfest Festival 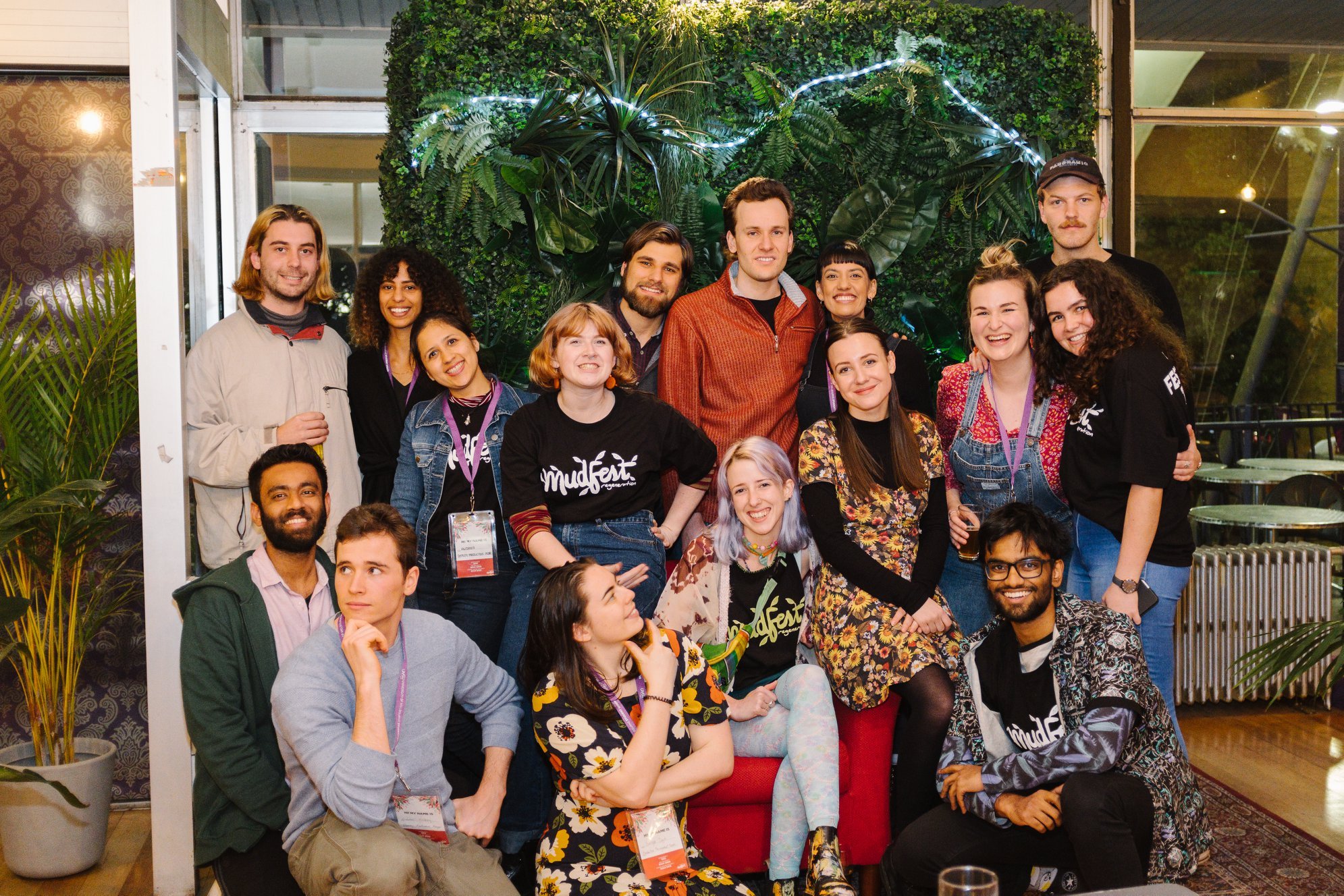 In 2019, Co-Artistic Directors of a student-run festival Mudfest made mental health and wellbeing for their team not only a priority, but a measure of success for the festival itself.

When Co-Artistic Directors Ellie Hamill and Lucy Holz took the reins to produce Mudfest in 2019, the duo paid close attention to both the encouragement and the caution coming from previous producers.

“There was a lot of commentary on the festival being exciting and rewarding, but also a high-stress environment. People would often warn us we will need a holiday after it,” said Ellie.

Established in 1990, Mudfest is now the largest student-run festival in the southern hemisphere.

Presented every two years by the University of Melbourne Student Union (UMSU), Ellie and Lucy stepped into the role as Co-Artistic Directors from their elected position as Office Bearers in the Creative Arts Department.

The pair were tasked with recruiting a multi-disciplinary team of producers and programming a festival spanning visual art, performance, film, music and interdisciplinary artforms.

Much like many projects across the sector, each year the festival is propelled forward by passionate, enthusiastic and dedicated individuals juggling various priorities – not only in their career and personal lives, but also extensive study commitments.

While such a combination may be responsible for the extraordinary work the arts industry produces, it can also be why stress or burnout can go undetected.

“People in the arts are so passionate about what they do, and it’s easy to pour so much of your heart and soul into a project and not take the time to set boundaries,” said Ellie.

With the appointment of a new team of 18 people across a wide variety of roles, Ellie and Lucy saw an opportunity to do things differently.
“All too often wellbeing is an afterthought and it’s often too little, too late. We wanted to make decisions from a wellbeing perspective from the beginning,” said Ellie.

A forward-thinking approach with the Arts Wellbeing Collective

Navigating a high-stress environment such as a festival means it’s crucial for leaders to put forethought into prioritising the mental health of everyone involved in a project. For the Mudfest team, this meant taking a preventative approach rather than be forced into damage-control mode when the festival was in full swing.

The Co-Artistic Directors decided to consult the Arts Wellbeing Collective to help shape their approach.

“Bringing the Arts Wellbeing Collective on board was an important step, because while I might have a commitment to wellbeing, they are the experts with the resources and training,” said Ellie.

Working closely with the team from the Arts Wellbeing Collective, the Co-Artistic Directors decided to host two workshops to support the production team and artists.

The first was conducted in the early stages of development with the entire festival team. It offered a space to discuss the upcoming festival, set boundaries, and unearth the team’s learnings from previous projects, as well as set key values and wellbeing goals to help shape a positive experience.

“Discussing wellbeing as a team early on meant that we had a shared language to look after each other and hold each other accountable,” said Ellie.

At the conclusion of the workshop, the team was armed with a tangible wellbeing plan.

This included scheduling times to celebrate wins, a commitment to building a sustainable programming schedule, and ensuring wellbeing was embedded into the decision-making process.

“Applying a wellbeing lens to all the programming decisions helped us to ensure important measures, such as the team getting enough time off and feasible timelines for artists,” said Ellie.

The second workshop was designed specifically for participating artists.

“We ensured this was offered early on so artists could also value wellbeing in their creative process.”

This was then followed by regular communications, and simple tips for mental health and wellbeing designed in collaboration with the Arts Wellbeing Collective team. Each update reflected the particular festival schedule to ensure a consistent flow of information and support.

The workshops, planning, strategy, and communications were part of a forward-thinking approach to wellbeing, growth and nurturing an artistic community, that spoke directly to the festival’s theme of “Regeneration”.

Regeneration is necessary in order for societies and individuals to flourish – and often requires rethinking how things might be “usually done.”

As Lucy and Ellie explained, “We must change and evolve to ultimately thrive. We wanted the festival to provide fertile soil to allow our artists to rediscover and push boundaries and support emerging artists to develop and blossom in their practice as they grow and learn, producing new original work in response to their reality.”

This extends to the arts sector, where making changes to how stress and burnout is tackled is vital for growth. “We are questioning how things are done and starting to prioritise people so they flourish in addition to the art,” added Ellie.

Nurturing the connection between the personal and professional

Placing wellbeing at the centre of the festival allowed the team to flourish in all aspects – artistically, professionally and personally.
Co-Artistic Directors and producers alike were balancing their festival positions with their studies, work-commitments and personal lives.

Such a juggling act can be a risk-factor for stress, overwhelm and burnout, which is compounded for a new team consisting of people who may be working in a festival environment for the first time.

“An area of risk was managing expectations as the team was learning to adjust how much they think they can take on, verses what can realistically be achieved in a set time frame.”

Mudfest has long succeeded at providing students with professional and creative development opportunities, and adding wellbeing skills into the mix will be sure to positively shape their careers.

“By being part of Mudfest, emerging artists, producers and festival managers are able to form a wellbeing habit they will take with them into future workplaces and projects,” said Ellie.

Making wellbeing a measure of success across the arts

The forethought and proactive approach taken by the Mudfest team holds important learnings for the broader arts sector.

“I think it’s really important to look after a team and the experience of creating art should be a positive one for everyone involved,” said Ellie.
With a background as a performer and experience in stage and production management, Ellie has seen firsthand how wellbeing can be overlooked behind the scenes.

Ticket sales and reception of a particular work or program are often viewed as the sole measure of success, she added. “It’s a huge issue in the arts industry, be it due to low resources or a toxic culture. I’ve been part of productions where the end result is the absolute pinnacle of success, and it doesn’t matter what happens behind the scenes to get there, and I’ve really disagreed with that approach,” said Ellie.

For Mudfest, the team wanted to invert this measure of success and place wellbeing and positive experiences on a pedestal.

“If the process has led to stress and burnout internally, then to me, the final result is not a success, even if it’s celebrated externally,” said Ellie.

As Mudfest has shown, a regenerative approach starts with one small step. A wellbeing plan can be as accessible as scheduling debrief, setting a mental health goal, or redefining measures of success.

“It’s key to make mental health part of the process, culture and values – something as simple as asking a team member ‘how are you?’ can open up space for open communication and proactive planning around work and life,” concluded Ellie.

A wellbeing habit can start a ripple effect that could reach many corners of the sector.

If you’re interested in planning for mental health and wellbeing, here are some prompt questions to get the conversation started:

The Arts Wellbeing Collective team can assist you to create a mentally healthy workplace, develop strategies for positive mental health and wellbeing, or review existing plans.

Simply reach out to the team.

The next festival will be run in 2021. Visit UMSU’s website at umsu.unimelb.edu.au/studentlife/arts for more information closer to the time.

This article appeared in Spotlight, the Arts Wellbeing Collective magazine:

The love in the squares: creating Power Up!

Power Up! Fog Theatre on Wellbeing

Sound Mind: Exploring mental health and the performing arts through music and conversation